Efficiency is key in order to have a stress-free move and that comes from an experienced, hard working relocation team. Our exceptional customer service standards are what set The Advance Group apart from other relocation companies. From our sales estimators, right down to our moving crews, we pride ourselves on going above and beyond for our clients. Our team is large and experienced, which allows us to provide quality service to each and every relocation project. Intelligence, genuine concern, and strong teamwork yield a smooth move and pleased customers.

Dear Advance Group - My husband Patrick Connelly has already sent a brief thank you and acknowledgement of your movers' professionalism during our March 26, 2013 move, but I would like to add to it.  Specifically I would like to name the 3 men:  Ryan, Gerald, and Rich.  As a team, they were excellent.  Their patience and hard work were noteworthy as we asked them to moves items from our old office to three separate locations.  All items were treated carefully and arrived at their destinations unscathed.  Ryan efficiently took apart our sofa that has two reclining ends and then put it together again at our home.  As Patrick noted, we greatly appreciated their respect for the need for quiet in a suite of psychotherapy offices.  In addition, they were very polite and friendly and it really felt like the five of us were working as a team.  They went above and beyond through little things, like writing a "FREE" sign and putting it on the old sofa they moved out of our house to the street. It was all these big and little things that made our moving day so smooth, and reduced our stress significantly.  We hope their hard work is acknowledged by management.  Thank you again for such wonderful service.

Ryerson Equity, a company based out of Borough Park, is in contract to purchase an eight story warehouse building, along with a one-story structure in Clinton Hill. The transaction will cost Ryerson Equity $26.25 million. The plan is to convert the purchased structures into a hotel, retail and offices. The structure at 29 Ryerson Street and the lot next door at 256-266 Flushing Avenue, make up 200,070 square feet that Ryerson Equity will attain. The property is currently owned by Robert Lewis, the owner of Total Records Information Management.


After purchasing the property, the buyer plans to lease. Expectations include a three floor hotel, two floors of offices, two floors to make up a gym, and retail on the ground floor. Sources say that the rooftop will be used for a bar as part of the hotel.


The deal, started February 27, is expected to close in mid-May.

Four new companies have signed leases at Times Square Plaza. The SJP developed building at 11 Times Square will be home to eMarketer, Senor Frog’s restaurant, Bank of America and Off the Wall Frozen Yogurt. The digital marketing, media and commerce data provider, eMarketer, is reportedly inking the deal for 53, 573 square feet of office space this week. Senor Frog’s, a Mexican themed restaurant signed a deal for 21,000 square feet, while Bank of America signed for a 2,393 square-foot location and Off the Wall Frozen Yogurt signed for 2,500 square feet. Tenants of this building also include Microsoft (230,00 square feet for its new headquarters).

The office tower at 75 Rockefeller Plaza has been around since 1947-originally known as the ‘ESSO Building’ for the Standard Oil Company. Time Warner Corporation has occupied it since 1993.


The building will undergo renovations after a switch in occupancy. LEED certification is becoming an essential aspect in creating new buildings and new opportunities in New York City. The upcoming project for a new building in Rockefeller Center is no exception. RXR recently signed a 99-year lease for 75 Rockefeller Plaza in Midtown. Renovations of the building are to start in summer of 2014 (when Time Warner’s net lease expires). Scott Rechler, Chairman and Chief Executive Officer of RXR states “When renovations are complete it will be the newest, most advanced, LEED Certified building in all of Rockefeller Center.”  There is a plan to have multi-floor retail occupancy.
http://www.rew-online.com/2013/01/24/11538/
21 comments: 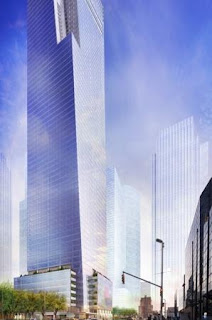 Manhattan West continues to grow. A twisting tower is coming to 3 Hudson Boulevard. The 1.7 million square foot tower will be located between 34th street & 35th street (near Hudson Yards). Dan Kaplan of FXFOWLE designed the building which will rotate 22 degrees from the base, up. The aesthetically pleasing tower will also be LEED platinum, due to the efficiency of the building.  The tower will stand roughly 1,000 feet high and will add to the stunning New York City skyline.
Residential dwellings will most likely be towards the top of the building where as the bottom will be used for retail and trading. At the top of the building, there will be several terraces and a rooftop deck. The roof top deck will include shielding from the wind. The exterior of the building will catch the sunlight, and also views of the Hudson River. With an ideal location and an eye catching design, this twisting tower will most definitely be an asset to the ever-evolving West Side.
http://www.nypost.com/p/news/business/realestate/commercial/lucky_at_hudson_blvd_1vlWlcVUhWwWkXtdAPt3HI
23 comments:

Penn Station, Madison Square Garden and Times Squares are all staples of Midtown. The new Midtown West Development that is underway will add another attraction to this location. The unique aspect of this new development is that it will be built over the active rail yard.

The Manhattan West development was started this week by Brookfield Properties. The 4.5 billion dollar project will stretch along Ninth Avenue and Dyer Avenue, from West 31st to West 33rd streets.  A platform will be built which two of the office towers will sit on. In order to build the platform over the rail yard, a series of 16 bridges must be made first.  The platform alone will cost 680 million dollars. The third tower, which will be utilized for retail and residential housing, will be built on land. A 1.5 acre public space will also be included where pedestrians may congregate. The entire project is set to be available for tenants by 2016.
http://www.dnainfo.com/new-york/20130115/chelsea/work-starts-on-45-b-west-side-skyscraper-project
17 comments: 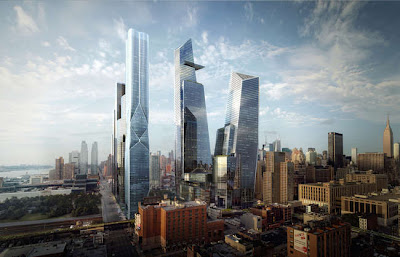 The future looks bright for the Hudson Yards. Manhattan’s west side will get a make-over within the next few years. Oxford and Related have leased the site which stretches from West 30th Street to 33rd Street, and from Tenth Avenue to Twelfth Avenue. The 1 billion dollar lease between Oxford and Related and the MTA, will be in effect for 99 years. The once industrial area was rezoned in 2005 and will include apartments, parks, office buildings, shops and event spaces in the years to come. The first building to go up is expected to open in 2015 and is striving for LEED Platinum certification. Committed tenants to this tower include Coach, and two other unidentified parties. For more information about this please click on the link below.